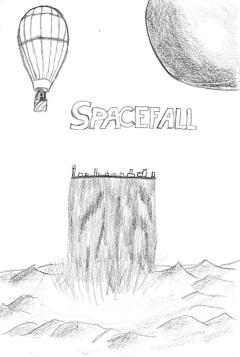 Submarines on Earth are almost exclusively for research if they are small, while if they are large they are almost exclusively for warfare. On Proxima Minor the situation is quite different. When the Ferrens and the Comptoni decided they were not going to leave the surface of the planet, but rather dig in to resist the flooding coming their way, for the first time commercial sized freight submarines had a market. Thus the submarine our four adventurers are currently travelling on is not like any submarine found on Earth.  It has a small crew quarters, a humble sized engine, and a massive cargo bay. Like all submarines though it is incredibly cramped for the crew. The room our four adventurers were staying in was tiny but incredibly had four bunk beds crammed into it. There was much curiosity about the latest person to join the adventure. Fiona was an Aeron who had heroically prevented an attempt on Kimberley’s life by one of her guildsmen.

“So Fiona,” asked Alfred, “what is your job exactly?”

“Why are you so surprised that I’m a pilot?” responded Fiona, not understanding Harold’s surprise.

“I’m not surprised about that, it’s just that we were only just flying in a Firefly 1 the other day, in fact Alfred here was the pilot.”

“Really?  Well my Firefly 1 is back on Pearl. I hope its safe there, I hate to think of anything bad happening to it if we close the rift too soon. It’s painted a beautiful red and yellow.”

“That’s funny,” started Kimberly, but Alfred tapped her elbow and made a shushing gesture at her.

“What?” Said Kimberley failing to appreciate why Alfred was cutting her off when she was just about to say the Firefly 1 they stole, and subsequently sold to the Vegani as scrap, was also painted red and yellow.

Alfred asked Fiona another question instead, “So what did you do as a Firefly pilot?”

“I delivered cargo for the Vegani over long distances. See the Comptoni would manufacture tools and equipment for the Vegani like solar panels, shovels, and batteries, so I would buy the equipment from the Comptoni, then load it onto my Firefly and fly out to the distant Vegani outposts and exchange the goods for food which I then could take back to Pearl for sale.”

At that moment there was a knock at the door and the Comptoni guild master who had given them safe passage on the sub popped his head in.

“Hello there, Kiron Kimberley, I would be honoured if you would allow me to give you a tour of my sub.”

Kimberley jumped at the opportunity. Immediately Fiona said that she would like to come too, and then followed Harold and Alfred.

Kimberley wasn’t looking happy about this, “You two men always insist on following me everywhere I go. I don’t understand it, why do you insist on never letting me out of your sight?”

Alfred answered, “We’re concerned for your safety that’s all.”

“My safety?  You barely know me. I actually stole your escape capsule and put your lives in danger. Yet you insist on putting yourself in harm’s way,” said Kimberley unappreciatively.

“We feel great sympathy for the plight of this world and believe that you are the one who stands the best chance of remedying this situation.”

“Great sympathy? But this isn’t even your world.”

“We all came from the Earth originally and the same part of it too by the look of it. This planet is a great place, well it used to be, and we would like to see it become great again. You Kim, you have spent a good portion of your life thus far obsessively seeking a solution to the calamities that befell your people, and while I can’t say that you’re the most agreeable woman I’ve ever met, you are the smartest and the most capable we have met thus far. We believe you when you say you can seal that rift and lower this ocean. We want to follow you and help you achieve your ambition.”

Kimberley rolled her eyes at this, however, Fiona looked genuinely moved.

“Incredible!” she uttered, “I never thought I would hear something so moving from an off worlder. You are blessed Kimberley to have companions such as these!”

Before Kimberley could speak the guild master stepped in and put one each of his hands on Alfred and Harold’s shoulders.

“Gentlemen, your words have touched my heart more preciously than you can know, I would be deeply honoured if you would allow me to give you a tour of this ship also.”

Kimberley blinked with confusion, for suddenly she was not the centre of attention and she had not seen this coming. The four adventurers filed out of the cabin and into the central corridor of the submarine.

“First stop, the bridge. Here is the nerve centre of my submarine,” announced the guild master.

Harold looked around and noticed that although the technology was still primitive compared to what they were used to in the asteroid belt, it was by far the most advanced technology he had seen yet on Proxima minor. “This technology is far better than anything the Vegani or the Aerons have!” he exclaimed.

“Yes indeed. In the old times on Proxima Minor the Comptoni were the machinists and manufacturers. We built bridges, cars, factories, and even the advanced aircraft the Aerons used to use before their technology regressed to neo-classical aircraft designs. We still do most of the engineering and manufacturing work on this planet, but our most advanced tools are deep underneath the ocean. Even if we had access to them still we don’t have access to enough power to make them work. So even our technology must still look primitive to your eyes, but rest assured once we get our planet back we will be making machines better than anything those layabouts on Earth could make!”

Next they walked through the cargo hold which was surprisingly bare of cargo.

“Normally, we never return to base without a full cargo hold. However, we are altering our schedule for the lady Kimberley here. We are attempting to grow more of our own food under the sea, but we would be helpless without the food we get from the Vegani. You might have noticed this, but we’ve been raising the air pressure inside the submarine was we dive deeper. Although this procedure is dangerous to do quickly, if we change the air pressure gradually the body can adjust to the worst of it. Having a higher internal air pressure helps to reinforce the structure of the submarine as we dive deeper.”

Harold looked up onto the roof of the cargo bay and noticed that the roof must have folded outwards to allow the cargo to be loaded in. He also noticed solar panels. After the cargo hold there was the engine room. The propellers were all powered by electricity produced by a tiny nuclear reactor.

“It was the dream on Earth for a century to produce cheap clean electricity from uranium, and here on Proxima Minor our engineers perfected the technique. Here we need put only a few grams of enriched uranium ore in here and we have all the power we need for a deep sea voyage.”

Harold spoke up, “But there are loads of batteries here, and in the cargo hold I noticed there were a lot of solar panels in there.  If you have nuclear power then why have those?”

The guild master frowned, “I am deeply embarrassed to admit this, we Comptoni are a proud people, very proud of our craftsmanship, but since the calamity uranium has been almost impossible to come by. Sometimes we have to actually voyage dry and charge up our batteries on the surface. We used to have the most wonderful technologies, it breaks my heart to see how humbly we must live now.  Technological regression is a terrible curse to have to endure. I have felt sympathy for the last Romans every day these past ten years.”

Alfred put his hand on the guild master’s should, “fear not, the Comptoni and the other guilds will rise once more to be glorious again.” The guild master smiled bravely. Kimberley noticed that Fiona was staring at Alfred as he spoke.

There was one more room for the adventurers to see. The observation room. Here they could see out into the depths of the ocean. It was completely unlike the oceans of Earth that were salty and full of fish and other life. Instead, this ocean was remarkably clear and for the most part empty. That is until they saw it: the planetary surface. Shapes appeared and gradually took distinct recognisable forms, what they were looking at was like an eerie ghost town vista. Buildings, vehicles, roads, and tools were standing on the bottom of the sea like absurd shipwrecks of land based objects. Because the ocean was still lacking in life compared to the abundance in Earth’s oceans the growth typically found on shipwrecks on Earth was not present at all.

Then they saw it: a huge underwater dome. It was dark, but covered with spotlights equidistantly spread over it. Harold pointed out to something he saw. There was a group of small construction submarines digging and laying foundations underneath the water.

“That dome!  They’re building another dome around it!” Exclaimed Harold realising what they were doing.

“Yes, that’s our destination, the town of Deliverance,” explained the guild master.

The guild master shook his head sadly, “No, the town is actually much smaller. The original dome has been encapsulated within another, and another, and soon yet another dome. As the water levels rise the water pressure increases to the point where we need additional domes to protect our towns. We can’t keep innovating the dome designs fast enough to match the rise in the water level. We need real deliverance soon!”

The adventurers all bowed their heads solemnly as the submarine entered the under water submarine pen.

I am philosophical therapist based in Australia. However, I offer Skype services for people who live in regional districts, or internationally providing the time zones do not clash. In my practice I emphasise honesty, self-knowledge, curiosity, self-acceptance, self-responsibility, compassion, empathy, respect for emotions, and understanding how key relationships work. View all posts by philosophicaltherapist